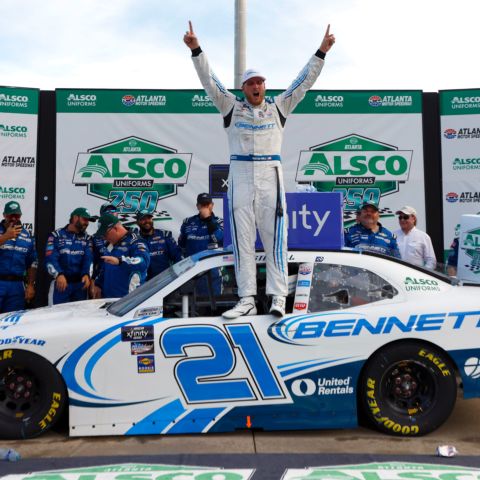 Two Californians and a Tennessean led for part of Saturday’s Alsco Uniforms 250 at Atlanta Motor Speedway, but a proud native of Georgia emerged with the spoils when the smoke cleared.

Austin Hill simply needed a dose of home cooking to emerge with his first NASCAR Xfinity Series victory since the season opener, as the Winston, Georgia, native held off Josh Berry and Ryan Truex to deliver an emotional triumph in front of an adoring crowd of Peach State fans.

Hill started fifth after qualifying was rained out and led a race-high 73 laps. He was rarely challenged in the closing stages, as Hill’s blue-and-white No. 21 Bennett Transportation and Logistics Chevrolet kept his challengers at bay by blocking their attempts to pass. Berry, who started and finished second, led 13 laps and fell just short of collecting his third victory in his first full-time season of Xfinity Series competition.

Berry won Stage 1, while Hill claimed Stage 2 and the win.

Ty Gibbs began the race from the pole and led seven laps, but contact with the outside wall ended Gibbs’ day bid for victory and relegated the Joe Gibbs Racing driver to a 35th-place finish.

AUSTIN HILL, NO. 21 BENNETT TRANSPORTATION & LOGISTICS CHEVROLET (ALSCO UNIFORMS 250 RACE WINNER): “I don’t even know where to start. I grew up racing here on the quarter-mile track when I was about eight years old. I have a lot of laps around that place and a lot of wins and memories. To finally win on the big track is great. I feel like it owed me one. To finally get it done means a lot. Our Bennett’s Chevrolet was on rails. It was probably one of the best cars I’ve ever had: the things I could do with that car, the lines I could run and just control the front. Whenever I wanted to get to the lead, I felt like I could. My spotter, Derek (Kneeland) told me that if I could get the lead on that last restart, to go get it, and control the race. To win at a place that I grew up racing at, I can’t really put into words. It’s just so special. It’s top of the list of wins for me right now, and definitely something I’ll remember for the rest of my career.”

JOSH BERRY, NO. 8 HARRISON’S USA CHEVROLET (RUNNER-UP): “I got a little bit of a run on Austin (Hill) and I saw Daniel (Hemric) dive down to the bottom (on the last lap). My spotter and I were a bit too conservative there at the end. All in all, it was a great day for the Harrison’s USA Chevy. To get a second-place finish and a stage win, it’s a good day. This superspeedway-style racing was different. I haven’t finished a lot of these races, honestly, so we got a lot of good information to take home for Daytona. No marks on the car today. We’ll take it.”

The event features 650 miles of NASCAR thrills and musical performances throughout the weekend, including concerts by Flo Rida, Candlebox, Blackberry Smoke, and more.

More information on the Quaker State 400 Presented by Walmart can be found online at www.AtlantaMotorSpeedway.com.