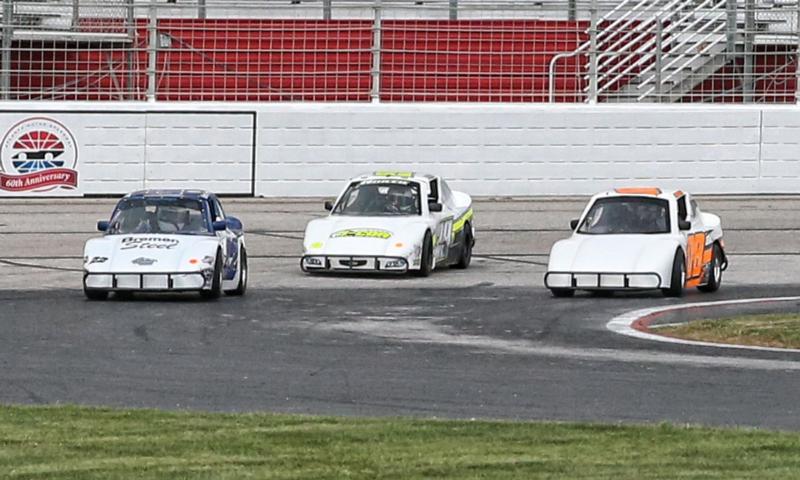 With seven rounds of racing in the books, division championships came down to the eighth and final round of Thursday Thunder racing at Atlanta Motor Speedway.

The closest championship battle ended up being in the Outlaws division where three drivers entered the night within 12 points of each other for the title. Kelly Puckett and Donovan Strauss sought to make up as many points as possible in the final event while Bailey North knew finishing 4th or better would clinch her the title.

Strauss led late when a caution stacked the field up for one final restart. Running in that pivotal 4th position, North was forced to restart on the outside, non-preferred line on the two-to-go restart. North was up to the task, getting a good jump on the restart and sliding down into the inside line to maintain her position. Strauss meanwhile slipped wide off turn 2, opening the door for Clay Hocutt to take the lead and Puckett to take 2nd.

At the checkered flag Hocutt scored his first victory of the season as Puckett and Strauss settled for 2nd and 3rd. North, in 4th, secured the championship hardware for the Outlaws division.

“I was just trying to hit my line and make sure I didn’t get caught up in any wrecks,” North said after the race. “I just had to finish top-4 to get the championship and I’m so thankful!”

In the Semi-Pro division Blaze Crawford was locked in a tight battle with Ashton Whitener for the championship entering the finale, but Crawford left nothing to chance in the race. The Fayetteville driver secured the pole and led every lap en-route to the win and the championship.

Michael Gannon had little room for error in the WJP Investments Young Lions championship hunt, but while his competitors faltered Gannon stayed consistent with a 3rd place finish, good enough to claim the title. Lanie Buice, a recent graduate of the Chargers division, earned her first victory in Young Lions.

It was far from a cruise on finale night for The Associates Group Pro championship leader Caleb Heady. Starting at the rear of the field, Heady climbed into the top-5 before finding trouble in turn 4. Despite that snafu, Heady won the championship thanks to the comfortable lead he built throughout the previous seven rounds of racing. Heady won six of the eight races run this summer; Cale Hall – the only driver besides Heady to win in the Pro division in 2020 – took the final checkered flag of the season.

Two drivers not only won their division’s championship, but they also completed perfect seasons Thursday night by winning their eighth race in eight tries. Tristan McKee completed the impressive accomplishment in the Bandits division while Bill Plemons Jr. backed up his 2019 Masters title with a perfect performance in 2020.

Here’s the full results from Round 8 of Thursday Thunder: